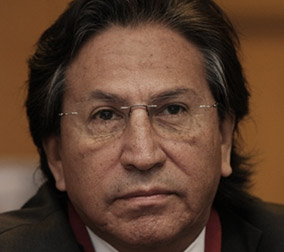 After completing his education, Dr. Toledo worked as a consultant for various international organizations, including the United Nations, the World Bank, the Inter-American Development Bank, the International Labour Organization (ILO), and the Organisation for Economic Co-operation and Development (OECD) and has also been a visiting scholar and a research associate at Harvard University and at Waseda University in Tokyo. He is a Full Economics Professor (on leave) at the University of ESAN, Peru’s leading business school.

President Toledo first appeared on the international political scene in 1996 when he formed and led a wide democratic coalition in the streets of Peru which resulted in the end of Alberto Fujimori’s autocratic regime. Alejandro Toledo won the new elections of May 2001 and became President of Peru.

His presidency ended in July 2006. Currently Toledo is a Distinguished Fellow in Residence at the Center for Advanced Studies and Behavioural Science (CASBS) at Stanford for the academic years 2006-2008 and a Payne Distinguished Visiting Lecturer at the Freeman Spogli Institute of International Studies’ Center on Democracy, Development and the Rule of Law (CDDRL) for the 2007-2008 academic year. Doctor Toledo combines his scientific career with his active commitment to the promotion of the Global Center for Development and Democracy, of which he is both Founder and President. The central concern of the Center is the study of the interrelationship between poverty- inequality and the future of democratic governance.