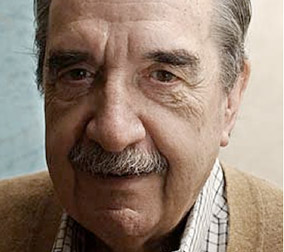 Raúl Alfonsin was Argentina’s 49th President. He had been active in politics for many years and began his involvement with the Unión Cívica Radical (UCR) at the age of 18. He participated in regional government as leader of the Chascomús Committee and as Provincial Deputy. He was President of the Regional Committee of Buenos Aires for the UCR from 1965-1966, and served as a Member of the National Assembly from 1963-1976.

Alfonsín co-founded the Permanent Assembly for Human Rights and actively participated in the search for the desaparecidos in the years after the military dictatorship.

In 1983 he became President of the UCR and was elected President of the Republic of Argentina, serving until 1989. During his time in office he oversaw the plebiscite that achieved peace with neighboring Chile, the creation of the National Commission for Disappeared Persons (CONADEP), the establishment of a national literacy campaign, and the Plan Alimentario Nacional (PAN), which was used as a model for similar hunger-combating initiatives in other Latin American countries.

In 1992, after leaving the presidency, Mr. Alfonsín created the Argentine Foundation for the Freedom of Information (FUALI). In 1997, he founded the Instituto Programático de la Alianza and held the position of General Coordinator for the blocks that form the Alliance. From 1999-2001, he was the President of the national committee of the UCR.

He was Vice-President of the Socialist International, and a National Senator for the Province of Buenos Aires. In addition, he was a member of the Inter-Action Council, the South American Peace Commission, the Inter-American Dialogue, and a member of the Advisory Committee of the PAX Institute and the Latin American Center for Globalization (CELAG).