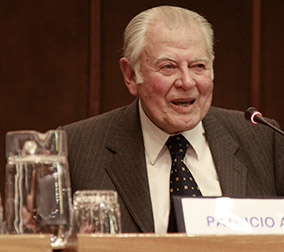 Aylwin served as Secretary of the Chilean Institute for Legislative Studies from 1949 to 1954. From 1953 to 1957 he was National Counselor and from 1985 to 1986 he was Vice-President of the Chilean Bar Association.

Aylwin became involved in politics in 1945 when he joined the Falange Nacional political party. He co-founded the Christian Democratic party in 1957 and served as its president for seven terms between 1958-1989. He was a Senator from 1964–1973 and President of the Senate from 1971-1973.

As President of his party, he led the democratic opposition in 1973, intending to work with President Allende and others to find a peaceful solution to the country’s political crisis. These attempts were brought to a brutal end on September 11, 1973, by the military coup that began the dictatorship of General Pinochet.

Following the coup, Aylwin continued to lead his party through one of the most difficult eras in Chilean history. He was co-founder and Vice-President of the Group of Constitutional Studies Group to reunite the country’s democratic sectors against the dictatorship. In 1980 he helped to protest against the constitution that the military government had imposed.

In 1989, he became the spokesman for the coalition that advocated the rejection of the Pinochet Dictatorship in a national plebiscite. The referendum led to the downfall of the military government that had ruled Chile since 1973. After the referendum, he participated in negotiations that led to 54 constitutional reforms that enabled a peaceful transition to democracy. Later in 1989, he was elected president, and he took office in early 1990

As President of Chile, Aylwin was appointed to preside over the Latin American and Caribbean Commission on Social Development and succeeded in re-inserting Chile into the international community. His activism in the United Nations led to the UN agreement to convoke the World Summit on Social Development in 1995. During his term in office, Aylwin strengthened civilian government by confronting Chile’s mounting social tensions and the human-rights abuses of the former military government while preserving Chile’s strong economic performance. He was founder and president of the Corporation for Democracy and Justice.

Aylwin received Doctorates Honoris Causa from universities in Australia, Canada, Colombia, France, Italy, Japan, Portugal, Spain, the United States and Chile. In 1997 he was co-recipient of the Council of Europe’s North-South Prize for contributions to fostering human rights, democracy, and cooperation between Europe and Latin America. In 1998 he received the J. William Fulbright Prize for International Understanding.