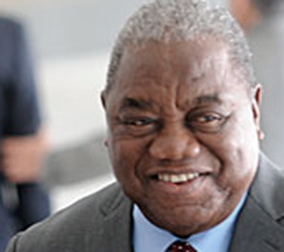 Date and Place of Birth: 19 February 1937, Zimbabwe (then Southern Rhodesia).

Education: Rupiah Banda earned a BA in Economic History from the Lund University in 1964.

Rupiah Bwezani Banda is the fourth President of Zambia serving from 2008 to 2011.

As President, Rupiah Banda has dedicated himself to improving Zambia’s economy, ensuring security, stability and prosperity for all Zambians. He has worked especially to improve healthcare and education, to increase agricultural production and to secure and increase the number of jobs in Zambia, particularly for people living in rural areas.

President Banda was one of a generation of young men who participated in Zambia’s anti-colonial struggle. At 27 years old he became Zambia’s first Ambassador to Egypt. He left that posting the year of the “six-day war” of 1967. At 30 years old he was named Zambia’s ambassador to the United States and moved to Washington DC.

In 1970, he was appointed General Manager of the National Agricultural Marketing Board (NAMBOARD), the state crop marketing company. He subsequently became head of the Rural Development Corporation (RDC), the state agricultural holding company, one the largest state conglomerates of its time.

In 1974 President Banda became the Permanent Representative of Zambia to the UN. He served as Foreign Minister of Zambia from 1975, a critical period in the history of Southern Africa. At that time, Zambian diplomacy centred on efforts to liberate Southern Africa and Zambia’s role was pivotal in the events and initiatives leading up to resolution.

Zambia’s abiding interest in the liberation of the region meant that its Foreign Minister was among the key figures in the diplomacy and events that eventually led to the emancipation of the region. As such, Banda is known by, and has interacted extensively with, many of the leaders of the region today.

He also served as President of the UN Council on Namibia which was effectively the government of Namibia while the matter of South Africa’s disputed mandate over the territory was resolved.

President Banda had been Member of Parliament for the Lusaka seat of Munali for many years. He has also held the position of Senior District Governor for Lusaka, where he was the political and administrative head of the Zambian capital.

After the 2006 general election he was tapped for the post of Vice-President in Dr. Levy Mwanawasa’s government. He took over Mwanawasa’s presidential responsibilities after Mwanawasa suffered a stroke in June 2008,  and following Mwanawasa’s death in August 2008, he became acting President. As the candidate of the governing Movement for Multiparty Democracy, he won the October 2008 presidential election. Seeking re-election in September 2011, he was defeated by opposition leader Michael Sata.