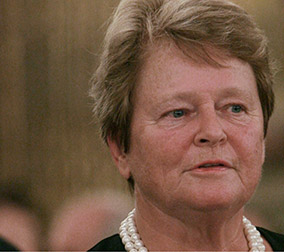 Place and Date of birth:

Spent 10 years as a physician and scientist in the Norwegian public health system. In 1965 she joined the Ministry of Health where she worked on children’s health issues including breastfeeding, cancer prevention and other diseases. She worked in the children’s department of the National Hospital and Oslo City Hospital and became Director of Health Services for Oslo’s schoolchildren.

At the age of seven, she was enrolled as a member of the Norwegian Labour Movement in its children’s section and has been a member ever since, leading the Labour Party to election victory three times.

Throughout her political career, Dr Brundtland developed a growing concern for issues of global significance. In 1983 the then United Nations Secretary-General invited her to establish and chair the World Commission on Environment and Development (the Brundtland Commission). The Commission, which is best known for developing the broad political concept of sustainable development, published its report Our Common Future in April 1987. The Commission’s recommendations led to the Earth Summit – the United Nations Conference on Environment and Development (UNCED) in Rio de Janeiro in 1992.

Dr Brundtland stepped down as Prime Minister in October 1996 and went on to become Secretary General of the World Health Organisation from July 1998 to July 2003.

In 2007 she was appointed Special Envoy for Climate Change by UN Secretary-General.