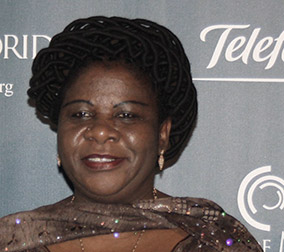 Luisa Diogo received her B.A. in Economics from Maputo’s Eduardo Mondlane University in 1983, and a Master’s degree in Financial Economics from the School of Oriental and African Studies (University of London) in 1992.

Luisa Dias Diogo was Prime Minister of Mozambique from 2004 to 2010. She was appointed Minister of Planning and Finance (2000) after a career of 20 years in the Public Sector, serving as an Officer at the Department of Economics and Investment(1980), Head of the Budget Department (1986), Deputy National Budget Director (1989), National Budget Director (1991) and Deputy Minister of Planning and Finance (1999).

She was distinguished in the list of World Top Leaders by Time Magazine (2004).

In 2006, the UN Secretary General, Kofi Annan appointed Diogo as Co-Chair of the High-level Panel on UN System-wide coherence in the Areas of Development, Humanitarian Assistance, and the Environment.

In 2007, Diogo ranked 89th on the Forbes 100 Most Powerful Women List and in 2008, she was distinguished with The Global Women’s Leadership Award. In the same year, she was appointed Member of the Africa Commission settled by the Prime Minister of Denmark.

Also in the same year, the UN Secretary General, Ban Ki-moon appointed Diogo as a Member of the High-level Panel on Global Sustainability (GSP).