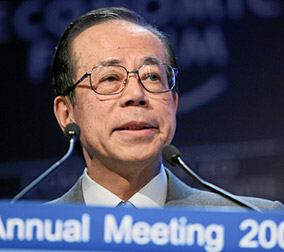 He attended the Azabu High School and graduated from Waseda University in 1959 with a degree in Economics.

After university, Yasuo Fukuda joined the oil company Maruzen Petroleum (now part of the Cosmo Oil Company) and was only minimally involved in politics until his father, Takeo Fukuda, became Prime Minister in 1976. From then until 1978, he served as his Political Secretary.

Mr. Fukuda ran for the first time for the House of Representatives in 1990 and directly won a seat. He was the House of Representatives’ Committee for Foreign Affairs Chairman from 1992 to 1999. In 1997, he was elected Deputy Director of the Liberal Democratic Party (LDP) and became Chief Cabinet Secretary to Prime Minister Yoshiro Mori in October 2000. He resigned from his position as Chief Cabinet Secretary in May 2004.

Yasuo Fukuda was considered a contender for the leadership of the LDP in 2006 but decided that he would not seek the nomination. Instead, Shinzo Abe succeeded Junichiro Koizumi as leader of the LDP and Prime Minister of Japan. Abe’s term was however cut short in September 2007, leading Yasuo Fukuda, seen as a consensual figure, to become Prime Minister of the country. Mr. Fukuda was the first son of a former Japanese Prime Minister to also take up the post. Fukuda and his cabinet were formally sworn in by Emperor Akihito on 26 September 2007. Mr. Fukuda was a moderate and flexible politician, and certainly not as neoliberal and nationalist – he refused to visit the Yasukuni sanctuary – as his predecessors. During his legislature, he had the honor of hosting a G8 meeting in Japan (July 2008).

On 1 September 2008, Yasuo Fukuda announced his resignation, triggering another LDP leadership election. The announcement was sudden and this resignation was widely compared to the sudden resignation of Abe a year earlier. His own resignation was motivated by a desire to remove impediments to legislative and political process due to deadlock between his party and the opposition-controlled upper house of the Diet. Despite his resignation, he has remained member of the House of Representatives and is still serving today.