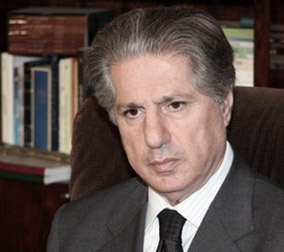 Mr. Gemayel attended French-oriented schools throughout his educational career. From Jesuit primary and secondary schools, he went to the Université Saint Joseph in Beirut where he earned an LL.B. in 1966.

Mr. Gemayel grew up in the Christian right-wing nationalist Lebanese Union Party (known as the Phalangists) founded by his father in 1936.

A lawyer by profession, Mr. Gemayel had long political experience as a partisan starting in his youth and as a member of parliament for 12 years, prior to his election as president in September 1982. His diligence and managerial talent accounted for his success in the realm of business, mass communication, and civic activities.

Mr. Gemayel got politically involved in the Lebanese war (1975-1982) by trying to reconcile the warring parties. He maintained contact with Muslim and Palestinian leaders throughout the war and nurtured a moderate disposition, knowing that in a democratic pluralistic society national leadership presupposes mutual responsiveness. He was his party’s logical nominee for the presidency after his strong and charismatic brother, President-elect Bashir Gemayel, was assassinated on September 14, 1982. Having kept a distance from Israeli temptations, especially after Israel invaded Lebanon in June 1982, Mr. Gemayel emerged as a “consensus candidate,” almost unanimously supported internally and received with partially guarded but explicit Arab support.

Mr. Gemayel was a “progressive rightist.” He viewed Lebanon’s distinctiveness in its way of life, which values human rights, entrepreneurship, moderation, “revulsion with totalitarianism,” and a yearning for unity in diversity. Mr. Gemayel believed that Lebanon was an Arab state with values and a distinct identity of its own. It lived in and depended on the Arab world for its prosperity.

After his term in office, Mr. Gemayel went into exile for twelve years, living in Switzerland, France, and the United States. He returned to Lebanon and began to organize the opposition to the government of President Émile Lahoud, thereby founding a new party, the Al qaida al Kataebiya, which claimed to be the true successor to the old Kataeb Party founded by his father.

In 2003, Amine Gemayel attempted to act as an intermediary between U.S. President George W. Bush and the Iraqi dictator, Saddam Hussein. Although his efforts to forestall the ensuing Iraq War were not successful, they fuelled speculation that he might be a candidate for Secretary General of the United Nations when Kofi Annan’s term expired – a position that eventually went to Korean Ban Ki-Moon.