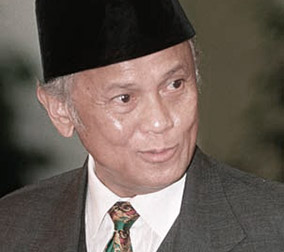 Education: Bacharuddin Jusuf Habibie studied at the Bandung Institute of Technology for one year and received Diploma (Germany’s first degree certificate equivalent to a Masters Degree) from RWTH Aachen University in 1960 and a Doctorate in 1965.

Bacharuddin Jusuf Habibie began his career at Messerschmitt-Bölkow-Blohm in Germany where he conducted research assignments, produced theories on thermodynamics, construction, and aerodynamics (known as the Habibie Factor, Habibie Theorem, and the Habibie Method). Habibie returned to Indonesia in 1974 where he is made CEO of PT. Nurtanio, a state owned enterprise. That same year he was appointed Technological Advisor to President Suharto. From 1978 to 1998 Habibie held the position of Minister of Technology and Research in Suharto’s Cabinet where he strove to pave a path for an industrialized Indonesia.

In 1990, The Union of Indonesian Intellectual Muslims (ICMI) was founded with Habibie as its Chairman (which he would serve for 10 years), to be used as the main instrument in appealing to the Muslim society. ICMI proved to be a successful venture, with 20,000 members by 1994, ICMI was able to bring together future political opponents such as Nurcolish Majid and Amien Rais.  In March of 1998, Habibie was elected Vice President of Indonesia only to be promoted to Presidency in May of that same year after Suharto´s resignation in May.

Under Habibie, Indonesia was able to stabilize from the chaos after the Asian Financial Crisis and from the last months of the Suharto Presidency. His anti-discriminatory gestures towards Chinese Indonesians are reflected through his policies that prohibited discrimination based on one’s status as pribumi (Native) or non-pribumi (Non-Native). In May of 1999, Habibie declared that a display of ID card as proof of residency would suffice, a change from having to display the Letter of Evidence of Republic of Indonesia Citizenship (SBKRI).

During the Susilo Bambang Yudoyono presidency, Habibie has been active as a presidential adviser as well as through The Habibie Centre to ensure democratization in Indonesia.

In September of 2006, Habibie released a book called Detik-Detik Yang Menentukan: Jalan Panjang Indonesia Menuju Demokrasi (Decisive Moments: Indonesia’s Long Road Towards Democracy) which recalls the events leading to May of 1998 when he was elected President.