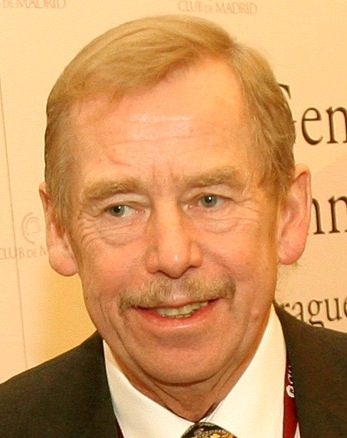 After two years of military service, he found work as a stagehand in a Prague theatre company in 1959 and turned to playwriting while becoming involved in the reforms of 1968, when it seemed the country would liberalize and throw off its Soviet shackles. However, the Soviet invasion of 1968 stamped out the budding movement and marked the beginning of Havel’s lifelong career in human rights.

Supporting himself by working in a brewery, Mr. Havel published numerous articles and essays in literary and theatre magazines distributed secretly. His writings were denounced by the government and banned. He was offered several opportunities to leave the country but declined, at one point saying, “The solution of this human situation does not lie in leaving it.” In 1977, along with hundreds of Czech intellectuals, he helped orchestrate and produce Charter 77, a document calling for basic human rights for Czech citizens. Havel, however, was arrested before Charter 77 was distributed, and in 1978 was tried, convicted and sentenced to 4½ years in prison for involvement with a group called the Committee for the Defence of the Unjustly Persecuted.

He was released in 1983 and, though under constant surveillance, continued to criticize the government through the underground press. He spent another nine months in prison in 1989 for involvement in protests. But that year, Civic Forum—an opposition movement Vaclav Havel helped form that was dedicated to democratic reforms—gained momentum and culminated in the bloodless “Velvet Revolution” of 1989. Mr. Havel, along with other opposition supporters, demanded the resignation of President Gustav Husak, who ultimately succumbed. Soon after, Mr. Havel was elected president of Czechoslovakia. He resigned from office briefly in 1992 when the Slovak parliament passed its own constitution. Shortly thereafter the nation split into two: Slovakia and the Czech Republic. Vaclav Havel was elected president of the Czech Republic in 1993 and re-elected in 1998 – serving until 2003.

In 2008, Vaclav Havel became a Member of the European Council on Tolerance and Reconciliation.

For his literary work and civic activities, especially as a human rights champion, Vaclav Havel was awarded numerous prestigious international prizes. They include: The Erasmus Prize (1986);The Olof Palme Prize (1989); The UNESCO Prize for the Teaching of Human Rights (1990); The Charlemagne Prize (1991); he also holds numerous honorary doctorates including from Columbia University, Toronto University, The Free University of Brussels.