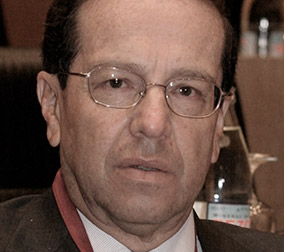 Studied Law and Political Science at the Universidad Católica of Ecuador.

Taught Political Sociology at the Universidad Católica and at the Centro Andino of the University of New Mexico.

In 1977 he presided the Commission in charge of drafting the Laws on Referendums, Elections and Parties which made up the legal framework that guided the democratic transition in 1979.

As President he had to tackle the economic crises of Latin America in 1982 which was exacerbated in Ecuador due to the economic problems inherited from the dictatorships and the flooding caused by El Niño. By the end of his mandate and despite the adverse political climate the policies he adopted had led to a stable economic recovery. Illiteracy was radically decreased and his government is remembered for its contribution to the strengthening of democracy through the respect for the institutions and the rule of law.

In Quito he currently heads CORDES a non profit organisation that studies economic, social and political problems in Ecuador.

He has written many essays and a dozen of books on politics, sociology and economics in Ecuador including Political Power in Ecuador (1977, fourteen editions) which has been translated to English (University of New Mexico Press, 1980 and Westview Press, 1985) and Portuguese (Paz e Terra, 1981); Debt and Development in Contemporary Ecuador (2002), and Portrait of a Nation: Culture and Progress in Ecuador (2009).

He is a member of the Inter American Dialogue (Washington), the Council of Ex Presidents presided by Jimmy Carter (Atlanta), the South American Commission for Peace (Santiago), the Pacific Council on International Policy (Los Angeles), the Comisión Andina de Juristas (Lima) and the Due Process of Law organisation (Washington).

Learn more about Osvaldo Hurtado’s past achievements and current endeavours at osvaldohurtado.com.