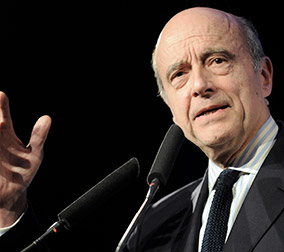 Alain Jupee held the position of Prime Minister from 1995-1997 under the presidency of Jacques Chirac.

Born in 1945, Alain Juppé attended the French National School of Administration (ENA) and the Institute of Political Studies (IEP). Apart from serving as Prime Minister, Mr Jupee was the  Minister of Defense and Veterans Affairs from 2010 to 2011, and Minister of Foreign Affairs from 2011 to 2012.

He started his career as financial auditor attached to the General Inspectorate of Finances (1972-1976). In 1976, he was appointed Special assistant in the private office of Prime Minister Jacques Chirac, before becoming Technical adviser in the private office of the Minister of Cooperation. In 1978, he joined the administration of the City of Paris, serving as Special assistant to the Mayor and Deputy Director of Finances and Economic Affairs.  He has been elected to a number of posts throughout his career, including National Assembly Deputy for Paris, Member of the Ile-de-France Regional Council, National Assembly Deputy for Gironde, President of the Urban Community of Bordeaux and most recently Mayor of the city of Bordeaux.

His proximity to Jacques Chirac earned him a position as deputy mayor of Paris in charge of finance from 1983 to 1995, as well as a position as secretary general of the RPR from 1988 to 1995. These two positions cost him his indictment for “breach of trust, concealment of abuse of social assets and illegal taking of interest” in 1999, in the affair of fictitious jobs at the Paris City Hall. In 2004, he was finally sentenced on appeal to a 14-month suspended prison sentence and a year’s ineligibility. This sentence led him into voluntary exile for several years, during which time he taught courses in Canada to future senior civil servants at the National School of Public Administration in Montreal.

After his voluntary exile, Mr Juppé decided to return to politics. In 2006, he ran for the municipal elections in Bordeaux and won the election in the first round. He was re-elected in 2008. In 2014, he won again with more than 60% of the votes and thus retained his seat as mayor of Bordeaux. In August 2014, Alain Juppé announced his candidacy for the primary of the right for the 2017 presidential election. On November 20, 2016, François Fillon beat him with more than 44% of the votes in the first round of the primary. On November 27, 2016, he was defeated by François Fillon in the second round of the primary.

During his long political career, his views have moved from popular and conservative Gaullism to liberal and pro-European centrism. In 2019, Mr Juppé was appointed member of the French Constitutional Council.