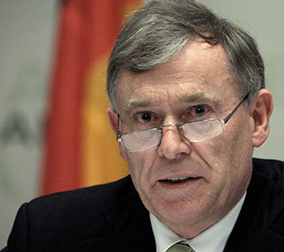 In 1977, Mr Köhler earned a Doctorate in Economics and Political Science from the Eberhard Karls University of Tübingen, where he holds an honorary professorship today.

Horst Köhler was appointed as State Secretary at the Federal Ministry of Finance in 1990. In this position he negotiated both the withdrawal of Soviet troops from the GDR and the Maastricht Treaty on European Monetary Union. He also served as Personal Representative of Federal Chancellor Helmut Kohl for the World Economic Summits of the then G7.

In 1993, Horst Köhler left public administration to become President of the German Savings Banks Association, before being appointed President of the European Bank for Reconstruction and Development (EBRD) in 1998. In 2000, he became Managing Director of the International Monetary Fund (IMF). He held this position until his election as Federal President in 2004. During his tenure at the IMF, he led efforts to resolve financial crises in a number of countries. In addition, he focused the Fund’s attention on the HIPC-initiative and macroeconomic stability of African countries.

From 2012 to 2013, Horst Köhler was a member of the UN Secretary General’s High-Level Panel on the Post-2015 Development Agenda. From 2016 to 2017 Horst Köhler co-chaired, together with Kofi Annan, a Special Panel advising the African Development Bank on the implementation of its strategic priorities. In August 2017, Horst Köhler was appointed by the United Nations Secretary-General, António Guterres, to be his Personal Envoy for Western Sahara, a position he held until May 2019. During his tenure, the parties to the conflict and the neighbouring countries met for the first time in six years to discuss the way forward in the political process to solve the conflict.

He continues to be active in many honorary posts, as a speaker and publicist.