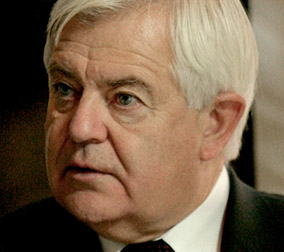 Milan Kučan graduated from the Faculty of Law of the University of Ljubljana in 1964.

Milan Kučan has been politically active since his university years. In 1968, he led the Slovene Youth organization, was active in the League of Communists and later in the Socialist Alliance. In 1978, he became Speaker of the Assembly of the Republic of Slovenia. Between 1982 and 1986 he worked in Belgrade as Slovenia’s representative in the party leadership. During this time he dealt in greater depth with the political system and constitutional aspects of interethnic relations. He returned to Slovenia in 1986 to become and remain one of the Slovenia’s central political personalities.

Between 1986 and 1989, at the helm of the Slovene communists, he supported open political dialogue and the expansion of political freedoms. Two years later, the “political spring” came into fool bloom and Slovenia was described as an island of political freedom in the East. The vision of the party led by Milan Kučan was “Europe now!”— the slogan for its 1989 convention. Mr. Kučan spoke up against the emerging social and political trends in Yugoslavia that led the country into states of emergency and a bloody war. He rose up against the lack of democracy, against ethnic inequality and against the trampling of human and minority rights. He strived for the verification of the then single party’s legitimacy through free elections.

In April 1990, Milan Kučan was elected President of Slovenia. He sought national reconciliation and consensus among political forces. He led Slovenia when it decided in favour of an independent state with a majority of 88.2%. Milan Kučan led Slovenia when it declared its independence in June 1991, addressing its citizens: ”Tonight, dreams are allowed. Tomorrow is a new day.” He led Slovenia to successfully defend itself from the Yugoslav Army’s aggression, and to successfully strike a peace agreement in July of that same year. He represented Slovenia at the peace conference for the former Yugoslavia en 1991. He led Slovenia to become a member of the United Nations in 1992.

Milan Kučan was President of Slovenia between 1992-1997 and between 1997-December 2002. Throughout this period Slovenia successfully adjusted its systems to modern integration processes. In March 2003 it held two successful referenda on accession to EU and NATO. Milan Kučan took an active role in campaigning for membership, in order for Slovenia to achieve the goals it set upon its independence. In May 2004 Slovenia became full member of both organizations.