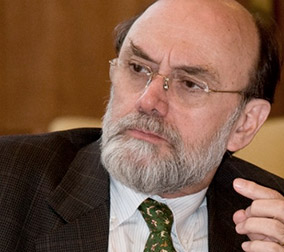 PhD in Political Sciences from the University of California, Los Angeles.

Bolívar Lamounier was a founder and the first president-director of the Institute of Economic, Social and Political Studies of São Paulo (IDESP), one of the main organs of socio-political research in Brazil, where he remains as a senior researcher and a research director. He was also member of the Constitutional Studies Commission (“Afonso Arinos Commission”) appointed by the Presidency of the Republic in 1985 to prepare a draft of the project for the Constitution, and co-ordinator of the program of constitutional revision studies at the Institute of Advanced Studies of the University of São Paulo, 1992 – 93.

Mr Lamounier was the coordinator of the group “The legislature and its relations with the Executive” at the Conference on Democratic Transition and Consolidation” in 2001. He is a member of the Political and Social Orientation Council (COPS) of the Federation of Industries of the State of São Paulo (FIESP); the president of the Director Council of the Centre of Public Opinion Studies (CESOP) of the University of Campinas (São Paulo); and a member of the Consultive Commission of the State’s Reform, appointed by former President of Brazil Fernando Henrique Cardoso in1996. He is also a member of the Board of the Inter-American Dialogue (USA).

Bolívar Lamounier is the author of numerous Political Science studies published in Brazil and abroad, which include “The parties and Elections in Brazil”, co-authored with Fernando Henrique Cardoso (1975); “Brazil: Inequality against Democracy” in Larry Diamond, Jonathan Hartlyn, Seymour Martin Lipset and Juan J. Linz, editors “Democracy in Developing Countries. Latin America” (1999), and “Formation and Evolution of the Democratic State in Brazil, 1930 – 1994”.