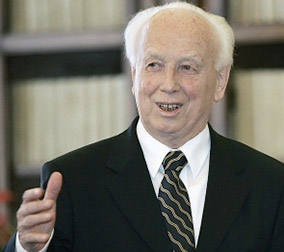 Mr. Mádl entered the Institute of State and Legal Sciences of the Hungarian Academy of Science in 1956. After obtaining his PhD in law in 1974, Mr. Mádl visited various universities in both Europe and the United States of America teaching comparative civil law, international private law and commercial law, as well as further researching the legal aspects of economic international relations. Until he became President, Mr. Mádl also served as President of the administration council of Herend, a porcelain factory.

Unaffiliated to any political party, and with moderate inclinations, Mr. Mádl went into politics after the transition to democracy in 1989. From 1990 to 1993, he served as a minister without portfolio under the conservative József Antall’s government. He was notably charged with supervising the Hungarian Academy of Sciences and redacting the government’s educational and scientific policies. Between 1993 and 1994, Mr. Mádl was Minister for Culture and Public Education and in 1994 he chaired the Council for Higher Education and Science while also chairing the National Cultural Fund. Additionally, he has chaired the Hungarian Civic Cooperation Association since 1996.

On May 3, 2000 Mr. Mádl was nominated by Fidesz and the FKGP for the position of President of the Republic. He was elected President by the National Assembly of Hungary on June 6, 2000, and inaugurated on August 4, 2000, ending his term in 2005. Although he held limited power in internal affairs, Mr. Mádl played a great role in Hungarian foreign policy, with some important diplomatic achievements.

On March 15, 1999, he was awarded the István Széchenyi|Széchenyi Prize for his internationally recognized scientific achievements in the areas of European law, international private law and international commercial law, as well as for his teaching, which founded a school of thought, and scientific organizational activity. He was also honoured in 1999 with the French order of the Légion d’honneur and in 2002 with the Gold Medal of the Jean Monnet Foundation for Europe for his commitment to peace, liberty, justice and solidarity in Europe.