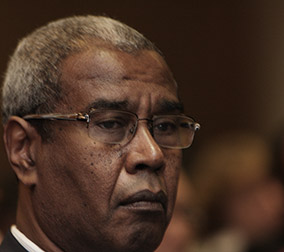 Degree in Law from the Catholic University of Louvain, Belgium.

Mascarenhas worked as a researcher at the University Center of Public Law of Belgium and as a Faculty Assistant at the Catholic University of Louvain from 1974 to 1977. He was founder of the Cape Verdean Bar Association.

Mascarenhas served as Secretary-General of the Peoples National Assembly of Cape Verde from 1977 to1980 and as President of the Supreme Court of Justice from 1980 to 1990. He also participated in many international Cape Verdean Delegations, including the Organization of African Unity (OAU) Conference to draft the African Charter on Human Rights, the Addis Ababa Conference to review the OAU Charter, Human Rights Conferences in Nairobi (Kenya) Strasbourg (France) and Bologna (Italy), and the International Law Symposiums held in Coimbra (Portugal) and Utrecht (Netherlands).

In 1991, he became the first democratically elected President of the Republic of Cape Verde and was reelected in 1996. During his term in office, Mascarenhas continued his participation in the international sphere. He was Chairman of the Third Conference on Regional System of Human Rights Protection in Africa and Europe and participated in the OAU Goodwill mission to Angola following the country’s first free elections in 1992. In 1993, he was Chairman of the Colloquium on Constitutional Transition in Africa, held at the Catholic University of Louvain, and from 1994 to 1997 he served as President of the Inter-State Committee for Struggle Against Drought in Sahel (CILSS). In his role as Deputy President of the OAU Ad-Hoc Committee for Southern Africa, he attended the signing of the Lusaka Protocol on Peace in Angola in 1994. He was elected President of the Community of Portuguese Speaking Countries (CPLP) in 1998.

After leaving office, Mascarenhas participated as Chairman of the Contact Group of OAU sent to Madagascar in March, 2002 to mediate the conflict that broke out following the Presidential elections of 2001. He participated in the January 2003 NEPAD and Security Forum organized by the Global Coalition for Africa held in Accra, Ghana.

Mascarenhas was the recipient of Doctorates Honoris Causa from Rhode Island University and the Law School of Coimbra University. He held many awards and distinctions, including the Grande Colar da Ordem da Liberdade (Portugal), the Grand Croix d‘Ordre National du Lion (Senegal), the Ordem José Marti (Cuba), the Ordre  de L’Unité Africaine (Libya), and the Ordem do Infante D. Henrique (Portugal). His publications included the articles “Réflexions sur la competence d’un Gouvernement démissionaire”, “La notion de l’expédition des affaires courantes,” and “La Charte Africaine des Droits de L’Homme et des Peuples”. His upcoming books to be published in Portuguese include The System of Government in the Cape Verdean Constitution of 1992 and The processes of Democratization in Africa: The Case of Cape Verde.