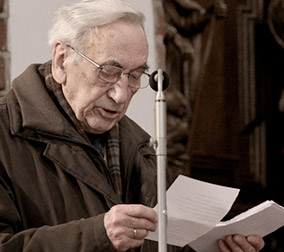 Law Degree from the University of Warsaw.

Mazowiecki worked as a journalist for many years, co-founding the independent Catholic monthly journal Wiez, which he edited until 1981. In 1956 he established the Warsaw Catholic Intelligentsia Club.

In the 1970s Mazowiecki became active in the Workers’ Defense Committee and after the December 1970 massacres in Gdansk and Gdynia he pushed for the formation of a special Parliamentary Committee to investigate the events. When strikes in the Lenin shipyard in Gdansk sparked the Solidarity labour movement in August 1980, Mazowiecki became one of the movement’s principal advisers and helped gain the support of Polish intellectuals.

In 1981 Mazowiecki was appointed first editor of Tygodnik Solidarnosc, the Solidarity newspaper. In December of that year, Mazowiecki was interned during the period of martial law, and was released a year later in 1982. In 1987, he became the Chief Advisor to the underground National Executive Committee of Solidarity. In early 1989 Mazowiecki served as the mediator in talks between the government and Solidarity that resulted in Solidarity’s legalization and the holding of the freest national elections in Poland since 1947. Solidarity’s stunning victory in those elections prompted Poland’s communist president, General Wojciech Jaruzelski, to appoint Mazowiecki as Prime Minister.

Beginning in 1992, Mazowiecki served as Special Rapporteur of the UN Commission on Human Rights for the Territory of the former Yugoslavia. As Rapporteur, he gathered firsthand eyewitness evidence concerning human rights violations against the civilian population. In July 1995, after the fall of Srebrenica, one of the “safe havens” in Bosnia, he resigned from his mandate in protest of the UN’s inaction regarding the tragedy. From 1989 to 2001, Mazowiecki served in the Polish Parliament. He also wrote the preamble of the 1997 Polish constitution.