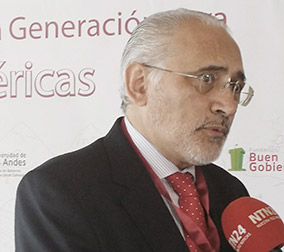 B.A. Mesa Gisbert, who graduated in Literature from Universidad Mayor de San Andrés, is a renowned Bolivian politician, historian and journalist. Before taking office as President, he played a foremost role as an opinion leader in the media of his country for more than twenty five years.  After having managed several local media, he created and ran the Associated Journalists Television enterprise (PAT for its acronyms in Spanish). He engaged in politics in 2002 as an independent Vice-presidential candidate, a function he displayed between 2002 and 2003. The dramatic political crisis that Bolivia endured in 2003 led to him to being appointed as Constitutional President.

He is the author of more than fifteen books and more than a hundred documentaries for TV. He is a member of the Bolivian Academy and Society of History. He has been awarded the King of Spain International Journalism Award and his country´s National journalism Award.

The 63rd President of the Republic of Bolivia. He served the constitutional government of his country from October 17th 2003 to June 9th 2005.

In his almost two-year administration, Mesa decisively contributed to the change that has been strengthened since 2006. He amended the Constitution, convened the Constituent Assembly, promoted departmental autonomy convoking the direct election of departmental governors, he held a Referendum that changed the country´s hydrocarbons policy reestablishing the State´s Petroleum Enterprise and substantially raising  the taxes for international  operators of that sector. He overcame the severe economic recession that had been inherited and doubled State exports. Finally, he made the respect for human rights and the vindication of the value of life both State policies.