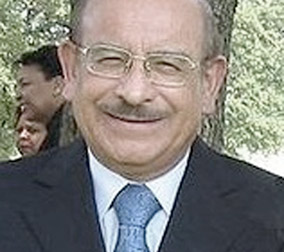 In 1955 Paniagua helped found the Independent Reformist University Front, which was later affiliated with the progressive Christian Democratic Party (PDC). In 1963, he was elected representative for Cuzco in the communal list for the Popular Action Party (AP) and the PDC, which took Fernando Belaúnde Terry to the Presidency of the Republic. Soon after, Paniagua became Minister of Justice and Education.

Following the coup d’état of General Juan Velasco Alvarado in October 1968, Paniagua was forced to leave Congress and was pursued politically. He left the PDC in 1974 in protest of their attitude towards the military regime, and soon joined the AP.

In 1980 he was elected Deputy to Congress and in 1982, after participating in the Constitutional Commission of the Deputies’ Chamber, he became the President of the Chamber. In 1984 he returned to the Ministry of Education but resigned later that year to resume his parliamentary activities.

The AP’s defeat in the elections of 1985 sent Paniagua to the opposition, from where he harshly criticized the Government and gained notoriety in academic and political circles as an attorney and professor. Paniagua opposed Alberto Fujimori’s reign, which began in 1990, and fought against acts such as the Law of Authentic Interpretation of the Constitution, which Fujimori used to authorize his second term in 2000.

After Fujimori’s resignation due to the political turmoil of 2000, Paniagua was elected President of Congress and named President of the Republic on November 22. He assumed the Presidency as a candidate of consensus, with the mission to normalize political institutions and summon free and transparent elections. He succeeded in his efforts to return Peru to the path of democracy with the celebration of the spring 2001 general elections, which led to the peaceful transfer of power from Paniagua to the winner of the elections the following July, Alejandro Toledo. Once free from his presidential commitments, in August, 2001 Paniagua was elected national chief of the AP.

One of Paniagua’s last achievements was to endow the OAS with an Inter-American Letter following the September 11th terrorist attacks to reinforce the commitment of the member states to the model of parliamentary democracy, exposing those countries that were experiencing a regression to authoritarianism.