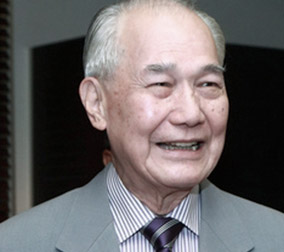 Degree in Economics and Law from Trinity College, University of Cambridge.

In January 1976, Anand was promoted to the highest Thai civil service ranking as Permanent Minister of Foreign Affairs. In that position, he was instrumental in the implementation of the Thai Government’s foreign policy of adjustment. Anand assumed a leadership role in negotiations with the U.S. Government on the eventual withdrawal of U.S. troops from Thailand. He was also a catalyst for the 1976 resumption of diplomatic relations with China, Laos and Vietnam. The return of a military-led authoritarian regime in October 1976 led to Anand´s suspension from his position as Permanent Minister, but he was soon reinstated as Thailand’s Ambassador to the Federal Republic of Germany. He retired in 1979, ending his 23 years in the Thai foreign service.

Following the military take-over in February 1991, Anand was invited to serve as Prime Minister of Thailand. While reluctant to assume the position, he was convinced that by doing so he could help lead Thailand back to the path of democracy. His Government initiated reforms in several key sectors of the Thai economy, including tax and trade regimes, industrial restructuring, environmental management, and educational and health services. Anand was the first Asian leader to recognize HIV/AIDS as a major development challenge, and he mounted a nation-wide program in 1991 to combat the epidemic in Thailand. As a result, Thailand was able to significantly reduce the number of HIV infections. During his tenure Anand proposed the ASEAN Free Trade Area (AFTA), which was endorsed at the 1991 ASEAN Summit in Singapore.

Anand’s Government organized free and fair general elections in May 1992 to return democratic rule to the Thai people. Despite turmoil after the elections, Anand was once again invited by the President of Parliament to serve as Thailand´s Prime Minister. He retired following the general elections of September that year.

In 1997, Anand was elected to the Thai Constitution Drafting Assembly and appointed Chairman. His oversight led to a successful ratification of the new Constitution later that year.