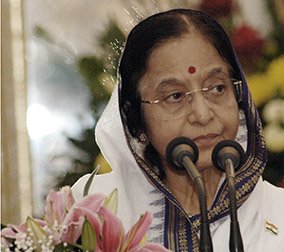 Patil was the first woman to serve as president of India (2007–2012). Patil earned a master’s degree in political science and economics at Moolji Jaitha College, Jalgaon, and later received a law degree from Government Law College, Mumbai. She joined the Indian National Congress (Congress Party). In 1962, at the age of 27, she was elected to the Maharashtra Legislative Assembly for the Jalgaon constituency. Thereafter she won in the Muktainagar constituency on four consecutive occasions between 1967 and 1985, before becoming a Member of Parliament in the Rajya Sabha between 1985 and 1990. A period of retirement from politics followed later in that decade.

On 8 November 2004 she was appointed as the 24th  Governor of Rajasthan. On 19 July 2007, Patil garnered nearly two-thirds of the votes and took office as India’s first woman president on 25 July 2007. The office of president has a five-year term and Patil retired from the role in July 2012.