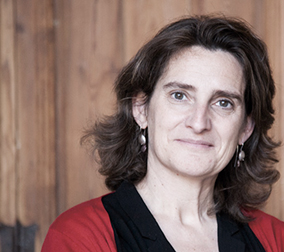 Minister for Ecological Transition in Spain

Teresa Ribera was Secretary of State for climate change in Spain’s Government between 2008 and 2011, responsible for environment and climate policies as well as the national meteorological agency. In earlier years, she was Director-General for climate (2004-2008) and held different positions in the ministries of Public Works, Transportation and Environment (1996-2004).

She chairs the Advisory Board of the Momentum for Change UNFCCC Initiative. In January 2017 she was appointed by the Swedish Government as a member of the Board of the Stockholm Environment Institute. She is also a member of the World Economic Forum’s Global Advisory Council on Climate, and of SDSN’s Global Leadership Council.

Teresa Ribera graduated in Law, holds the diploma in constitutional law and political science of the Centro de Estudios Constitucionales (Spain) and belongs to the Cuerpo Superior de Administradores Civiles del Estado. She has been assistant professor in public law in the Universidad Autónoma de Madrid.