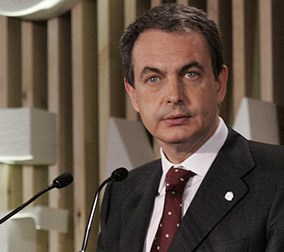 José Luis Rodríguez Zapatero is a former President of Spain. He served between 2004 and 2011.

His two terms were characterised by civic and social reforms, the management of the international economic crisis of 2007-2008, and the ceasefire of Basque separatist group ETA.

In 1982, Zapatero obtained his Bachelor’s degree in Law from the University of León, Spain, where he then was professor of Constitutional Law before becoming a Member of Parliament for León in 1986, under the Spanish Socialist Workers’ Party.

In 2000, he became the party’s Secretary General on a platform of internal unity and of being a responsible opposition. In 2004, he won his first general elections. During his first term as President, he focused on the creation and extension of civic and social rights, such as marriage equality, an important increase of the nation’s minimum wage, and legal measures against gender violence. In addition, his Government initiated the gradual withdrawal of all Spanish soldiers in Iraq. On his second term, after his 2008 victory, Zapatero focused on reducing the effects of the 2007-2008 international economic crisis in Spain. And in October of 2011, following several periods of volatile negotiations, his Administration achieved that the Basque separatist group ETA declared a definitive cease of its violent activities after 52 years. Internationally, Zapatero worked for peace and poverty reduction, promoting the creation of the UN Alliance of Civilizations, the Water Fund in Latin America, and the Debt for Education debt swaps.

After leaving the Presidency in 2011, José Luis Rodríguez Zapatero published “The Dilemma: 600 days of vertigo” in 2013, an account of his most difficult decisions between 2008 and 2011. Additionally, Zapatero has Doctorates Honoris Causa from the Université Toulouse 1 Capitole in France, from the Universidad Mayor de San Andrés in Bolivia, and from the Universidad Autónoma de Santo Domingo, in the Dominican Republic.

Currently, he is Chairman of the Socially Responsible Recruitment Forum, and patron of both the CERMI Women’s Foundation and the World Sustainable Development Forum. He is also an active member of the World Leadership Alliance-Club de Madrid and the International Commission against the Death Penalty.