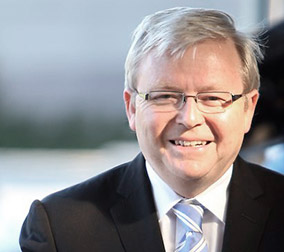 Kevin Rudd was twice Prime Minister of Australia, from 2007-2010, and again in 2013. He served as leader of the Australian Labor Party from 2006-2010. The Rudd Government’s first acts included signing the Kyoto Protocol and delivering an apology to Indigenous Australians for the Stolen Generations. The previous government’s industrial relations legislation, WorkChoices, was largely dismantled, Australia’s remaining Iraq War combat personnel were withdrawn, and the “Australia 2020 Summit” was held. In response to the global financial crisis, the government provided economic stimulus packages, and Australia was one of the few developed countries to avoid the late-2000s recession. Following his first term as prime minister, Rudd was appointed minister for foreign affairs in the Gillard administration. In February 2014, he was named a Senior Fellow with John F. Kennedy School of Government at Harvard University.