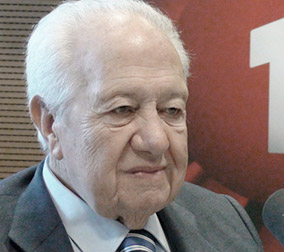 As a student, Soares was an activist against the Salazar dictatorship and in 1957 he began his law practice defending political dissidents. In 1964 he helped found a clandestine society called the Portuguese Socialist Action (ASP), that in 1994 became the Portuguese Socialist Party. He became Secretary General of the ASP in 1973, leading the organization, and later political party, until 1986. By the time dictatorship fell in 1974, Soares had been jailed 12 times and exiled twice, in São Tomé (1968) and Paris (1970–1974).

He came back to Portugal in 1974 and became Foreign Minister in the new but still military-controlled government, where he oversaw negotiations for the liberation of Portugal’s colonies.

In 1976 Soares became the first constitutionally elected Prime Minister since the 1974 revolution, serving from 1976 to 1978, and from 1983 to 85. During his time in office he oversaw Portugal’s entry into the European Union.

Soares also chaired the “International European Movement” since 1997. In 1999 he was elected Deputy to the European Parliament where he is a member of the Commissions of Foreign Affairs, Human Rights and of Common Security and Defense. He was also the candidate of the European Socialist Party for the Presidency of the Parliament.

Soares was the author of a number of books on philosophy and politics, including his partly autobiographical work Le Portugal baillonné: un témoignage (1972). He received many awards and distinctions including the Human Rights International Award (1977), the Robert Schumann Prize (1987) and the Simón Bolívar Prize (1998).