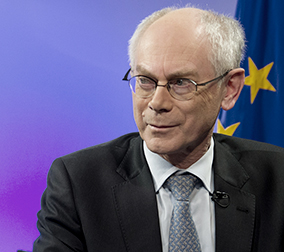 Van Rompuy earned a bachelor’s degree in philosophy (1968) and a master’s degree in economics (1971) from the Catholic University of Leuven. In 1972 he began his career as an economist at the National Bank of Belgium. The following year he entered politics, serving as the vice president of the youth section of the centre-right Flemish Christian Democrat party. He left banking in 1975, and within three years he was working in the Christian Democrats’ national office. From 1988 to 1993 Van Rompuy served as president of that party.

His background in economics was put to use in 1993, when he was elevated to the dual posts of deputy prime minister and budget minister. In the latter role, he significantly trimmed the country’s public debt. He left office after the Christian Democrats’ defeat in the 1999 general election. That year he entered the legislature as a member of the Chamber of Representatives, and in 2004 he was named minister of state. With the return of the Christian Democrats to the majority in July 2007, Van Rompuy was named leader of the Chamber of Representatives.