A key figure in the multilateral system, Javier Pérez de Cuellar managed to ease regional tensions in the midst of the Cold War during his tenure as UN Secretary General. His deep-rooted democratic credentials were self-evident in leading Peru's interim government to deliver free and fair elections after a period of authoritarian rule.

Javier Pérez de Cuéllar, Member of Club de Madrid (CdM), former President of Peru’s Council of Ministers (2000-2001) and a former Secretary-General of the United Nations (1981-1990) has passed away at age 100. CdM Members and the Secretariat mourn his loss.

Pérez de Cuellar was among the first to join Club de Madrid in 2002 and was very engaged in the organization’s decision-making through the General Assembly until he decided to step back from public life.

When he became Secretary General of the United Nations in 1981, Javier Pérez de Cuellar had forged a diplomatic career built on competence. He had long represented Peru at the UN and held other diplomatic posts in Europe. He was the first UN Secretary General from Latin America and the only one from this region to this date.

Pérez de Cuellar was not an obvious nor popular choice for the top diplomatic post in the world. Yet during his two-term tenure as UN Secretary General, he managed to broker landmark peace agreements, most notably the end of the 10-year Iran-Iraq war and the withdrawal of Soviet troops from Afghanistan. He also managed to ease tensions in Cambodia, El Salvador and Nicaragua.

Many of these were proxy conflicts spurred out of an overlying dispute, the Cold War. The tension between the US and the Soviet Union was at its frostiest when Pérez de Cuellar began his term and in its final days when he stepped out. While US President George HW Bush and former President of the Soviet Union, Mikhail Gorbachov -also a CdM Member- played a larger role in ending the Cold War, Pérez de Cuellar’s mediation skills should not be overlooked. From his position in the UN, he was instrumental in bringing the US and the Soviet Union together to solve regional conflicts that only a few years ago seemed frozen in time.

The current UN Secretary General, António Guterres, also a CdM Member, said after knowing of Pérez de Cuellar’s death that he was “an accomplished statesman, a committed diplomat and a personal inspiration who left a profound impact on the United Nations and our world”.

When his UN mandate ended, Pérez de Cuellar went on to run for Peru’s Presidency against democrat-turned-authoritarian Alberto Fujimori, a bid that he lost. When Fujimori’s authoritarian rule collapsed in 2000, he became President of the Council of Ministers of Peru (a position equivalent to that of a Prime Minister) under President Valentin Paniagua. Their interim transitional mandate led to free and fair elections in the Latin American nation. He continued to serve Peru as Ambassador to France in the resulting government.

Pérez de Cuellar was a cultured diplomat who spoke Spanish English and French, devoted to reading literature (he confessed that the Hispanic classics offered him much needed self-guilty breaks from UN reports) and wrote poetry. 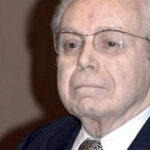