Club de Madrid Member Vaira Vike-Freiberga also participated in the Q&A session, while warning that she has suffered a boycott attempt to the digital broadcasting of the event in her country.

The Belarusian human rights activist Sviatlana Tsikhanouskaya participated on 18 May in an event organised by Club de Madrid to discuss about the current political situation in Belarus and the human rights environment in the region, in light of the ongoing conflict in Ukraine.

The conversation took place in the IE Tower in Madrid and was moderated by Cristina Manzano, Director of EsGlobal and IE Insights and Board Member of Club de Madrid.

“Many people in Europe see the world between Russia and Ukraine like a football match. They prefer to be spectators rather than players. But Putin doesn’t want to win this game, he wants to capture the full stadium”. It was with this simile that the leader of the political voices of the opposition in her country began her speech began her speech, after the Secretary General of the Club de Madrid, María Elena Agüero, and the Vice Dean for Management and Development at IE School of Global and Public Affairs, Ángel Alonso, opened the event with a few brief words.

Tsikhanouskaya was awarded the International Charlemagne Prize in the service of European unification in 2022, as well as the European Parliament’s Sakharov Prize for Freedom of Thought in 2020.

“Lukashenko is a Putin accomplice and collaborator. Our soldiers don’t have to fight and don’t have to defend the name of Belarus in this war”, Tsikhanouskaya said of her country’s collaboration with Russia in the invasion of Ukraine. She repeated this in an interview with the Spanish newspaper La Razón, in which she said that “Lukashenko has to pay for the support Putin gave him in 2020”. You can read the full interview here.

During question time, an IE Russian student asked Tsikhanouskaya on how to oppose events such as those in Ukraine from countries where it is not possible to express anti-government views: “I am a Russian student in Spain. I do not support Putin’s regime but I will be eventually back in Russia. What can I do from inside the regime to contribute to the fall of the regime?”.

“It is very difficult to fight when you are in the country where the regime happens. I would be afraid. But people every day take part in these situations in spite of the consequences, and it matters. Even communication with the family is an important step”- Tsikhanouskaya responded.

“Dialogue can only exist when two sides want to communicate. It is very important to understand that in some regimes the force and pressure is used to communicate, and there is no dialogue”

The event was followed both in person and online by important personalities and journalists who were very interested in the words of the Belarusian opposition leader. Club de Madrid Member Vaira Vike-Freiberga also participated in the Q&A session, while warning that she has suffered a boycott attempt to the digital broadcasting of the event in her country. 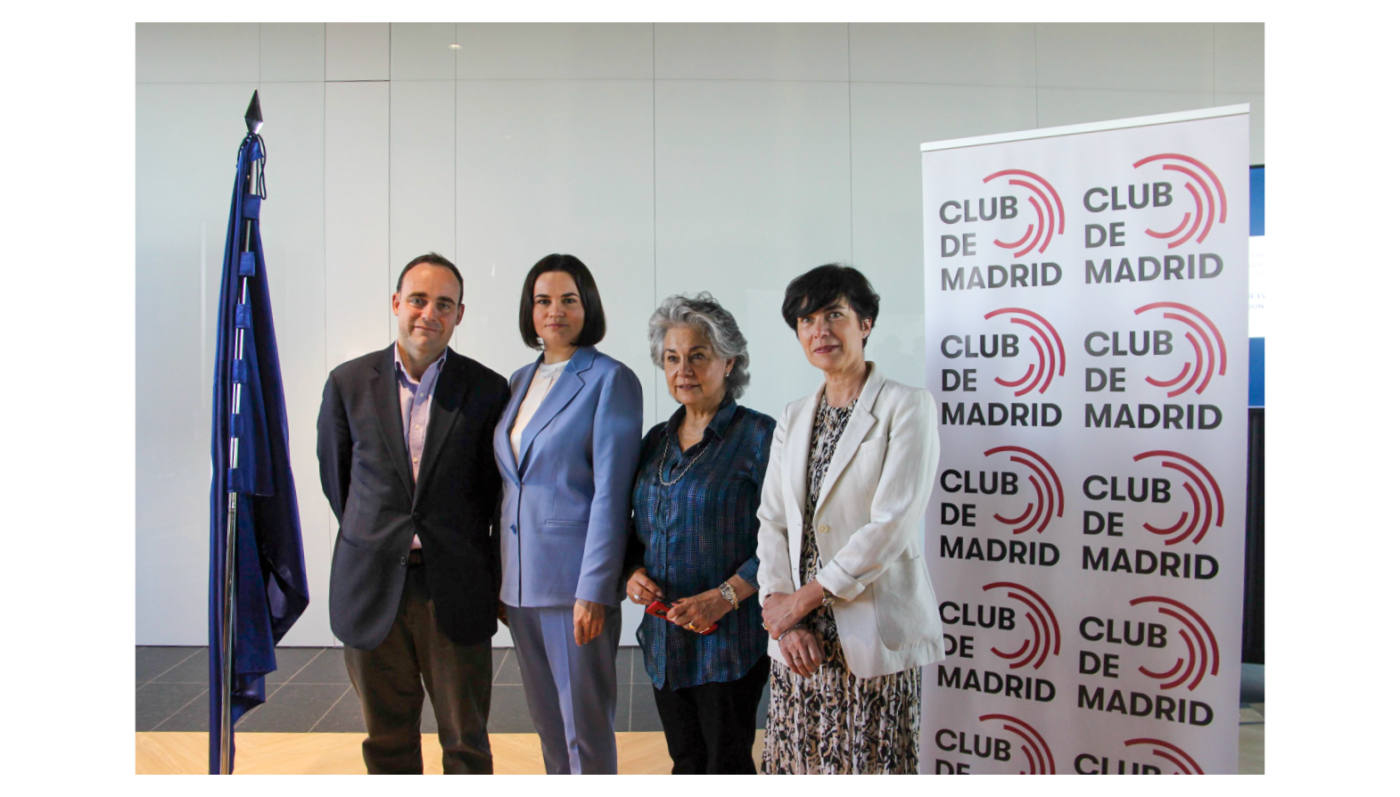