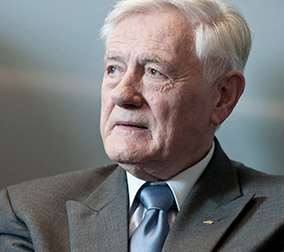 Attended the Faculty of Natural Science at the Munich University and in 1960 graduated from the Illinois Institute of Technology as a civil engineer.

Valdas Adanmkus emigrated to the United States in 1949 where he found a blue-collar job with a manufacturer of spare car parts in Chicago and later worked as a draftsman in an engineering firm.

President Adamkus has a long history of political activism and service to Lithuanians both in the United States and at home. During World War II, while still in Lithuania, he joined the resistance movement and published the clandestine paper Jaunime, budek! (Youth, Be on Guard!). In 1944, he entered the Homeland Defense Team to fight the Soviet Army and took part in the battle of Seda in western Lithuania. Soon after, his family moved to Germany where they stayed until they immigrated to the US in 1949. Once in the US, he continued his efforts to organize and mobilize support for the Lithuanian cause.

In 1951, Adamkus created an academic-sports club of Lithuanian Americans, LITUANICA. He served as Vice-president of SANTARA-SVIESA (Accord-Light), a cultural-political organization of Lithuanian émigrés of liberal orientation, from 1958-1965 and as President in 1967. Adamkus actively organized protests in the US against Lithuania’s occupation by the Soviets, initiated numerous petitions, and worked as a translator with US military intelligence. From 1961 to 1964, he was a member of the Board of the American-Lithuanian Community (LC), Vice-Chairman of the Centre Board, and member of the American-Lithuanian Council (ALC). He was also Chairman of the Organizing Committee of the World Lithuanian Games in 1983. During his time in the US, Adamkus was an active member of the Republican Party.

After his return to Lithuania, he became the director of the Stasys Lozoratis presidential campaign in 1993. He actively campaigned in the 1996 general elections, uniting moderate-conservative forces. In 1997, Adamkus was nominated by the Lithuanian Center Union for the Siauliai City Council.

He was elected as President of Lithuania in 1998, defeating Artūras Paulauskas in the runoff, serving from then until 2003, when he ran for re-election, but was unexpectedly defeated by populistic Rolandas Paksas. He returned to politics as surprisingly as he had left, after the presidential scandal of 2003/2004, when his former rival Paksas became the first European head of state to be impeached and removed from office. Adamkus ran for the presidency again and was re-elected in June 2004. He chose not to run for re-election during the Lithuanian presidential election in 2009 and was succeeded on 12 July 2009 by Dalia Grybauskaitė.

He holds Doctorates Honoris Causa from the Universities of Indiana, Illinois, De Paul, Vilnius and Vytautas Magus, Kaunas, among others. He was awarded the International Environmental Award for Outstanding Achievements, the Gold Medal of the EPA, and the US Presidential Award for Outstanding Service. He has established an annual award granted to Lithuania’s noted environmental specialists and scholars. Adamkus won gold and silver medals in track-and-field events at the Olympic Games of the Enslaved Nations in 1948.