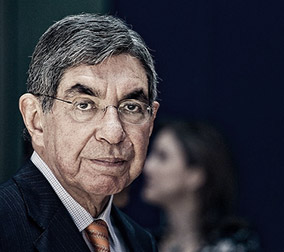 Mr. Arias embarked on his political career in earnest in 1970, as assistant to José Figueres, a former President who was again seeking election. When Figueres was elected in 1972, Óscar Arias was given a seat in the government as Minister of National Planning and Political Economy. In 1975 his party (Partido Liberación Nacional) elected him International Secretary and in 1979, General Secretary. He represented the party at several Socialist International congresses.

In the 1978 elections, when the Christian Social Unity Party won the presidency, Mr. Arias was elected to the Legislative Assembly but withdrew in 1981 to work for his party’s presidential candidate, Luis Alberto Monge, who won in 1982. Nominated himself in 1985, Óscar Arias was elected President in 1986.

Although critical of the political system in Nicaragua, Mr. Arias has concentrated on engaging Nicaragua and the other Central American states in a peace-making process. In May 1986, he met the Presidents of Guatemala, El Salvador, Honduras, and Nicaragua to discuss the proposals for a peaceful solution that had been worked out by the Contadora group. They did not reach full agreement, but early in 1987 Mr. Arias succeeded in calling a new meeting at which he submitted his own peace plan which served as basis for the accord approved in Guatemala on August 7.

After his first term, President Arias worked hard to promote his new ideas concerning the human safety, the global government and the human development. In 2003, following fierce demands of the Costa Rican people to have him back, he started a new political campaign to run the country. After his optimistic and positive campaign, President Arias was elected on 5 February 2006 for the four following years.

In 2009 Mr. Arias served as mediator in the Honduran constitutional crisis between Manuel Zelaya and Roberto Micheletti but did not manage to untie the knot between them. His term ended in 2010 – the year when Laura Chinchilla was elected the first female President of Costa Rica.

He received around 50 doctorates Honoris Causa from several universities including Harvard and Princeton. He received numerous prizes: the Martin Luther King Jr. Peace prize, the Philadelphia Liberty Medal, the Jackson Ralston Prize, the Príncipe de Asturias Prize, the Albert Schweitzer prize for Humanitarianism and the Americas prize. Most importantly, he received the Nobel Peace Prize in 1987 and used his reward money to establish the “Fundación Arias para la Paz y el Progreso Humano” (Arias Foundation for Peace and Human progress).