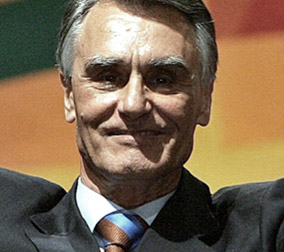 Researcher for the Calouste Gulbenkian Foundation from 1967 to 1971. Director of the Economía journal of the Catholic University of Portugal and Director of the Research and Statistics Department of the Bank of Portugal from 1977 to 1985. Cavaco Silva has been a professor continually since the 1960s.

Cavaco Silva entered into politics in 1974 when he joined the Partido Popular Democratico (PPD), and later the Partido Social-Demócrata (PSD). He was elected to the Portuguese Parliament in 1980 and served as the Minister of Finance and Planning that same year. He was as the President of the National Planning Council from 1981 to 1984. He became President of the Social Democratic Party in early 1985 and served as Prime Minister of Portugal from the fall of 1985 until 1995. Under his leadership, Portugal became a member of the European Union in 1985.

After his two consecutive terms as president, Cavaco Silva retired from active politics and is currently a Professor at the Catholic University of Portugal and Economic Adviser to the Bank of Portugal.

Cavaco Silva has received Doctorates Honoris Causa from the University of York and the University of Coruña. He has been awarded numerous honors, including the Joseph Bech Prize (1991), the Freedom Prize from the Schmidheiny Foundation (1995), and the Carl Bertelsmann Prize (1995). He is the Author of many books including Economic Effects of Public Debt, Public Finance and Macroeconomic Policy, Portugal and the Single Currency, and The European Monetary Union, as well as numerous articles in the fields of economics, finance and politics. Cavaco Silva is a Member of the Royal Academy of Moral and Political Sciences of Spain.