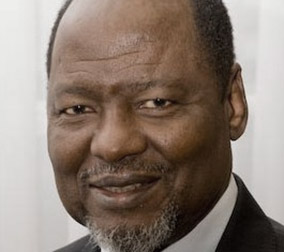 Joaquim Chissano is a former President of Mozambique.

Born 22 October 1939, in Gaza province, south of Mozambique, Mr. Chissano registered at the University of Poitiers, France to study Medicine in 1961 but in 1963 decided to leave his studies and move to Tanzania to dedicate himself fully to the movement for national liberation with the Front for the Liberation of Mozambique (FRELIMO) which he helped establish in 1962.

He played a fundamental role in the negotiations of the Lusaka Accord signed in 1974 with the Portuguese Government on the Independence of Mozambique. In September of the same year, with only 35 years of age, he was named Prime Minister of the transitional government that led to the proclamation of independence in June 1975. After independence he was named Minister of Foreign Affairs. Along with Samora Machel, serving as president, he participated in the negotiations of the N’Kotami Accord signed with South Africa in 1984. After Samora Machel’s death in 1986 Mr. Chissano was elected President of the Republic.

As Head of State, he undertook important socio economic reforms, formalised in the 1990 constitution, opening the country to a multiparty system and the free market similarly, he successfully managed negotiations with the former military group RENAMO putting an end to 16 years of war with a peace treaty signed in 1992. In 1994 he won the first multiparty elections in the country and was re-elected in 1999. Although the Constitution allowed it, he decided not to run for re-election in 2004 and dedicated himself to his Foundation (The Joaquim Chissano Foundation) and other causes.

​​Currently, he is a member of the Club of Madrid, The Hunger Project, International Crisis Group, Peace Parks Foundation, Goodwill Ambassador for CPLP (Portuguese Spoken Countries Community) and Global Partnership Initiative Youth Ambassador. He has received awards from many countries and has received several prizes, including the inaugural Mo Ibrahim Prize for Achievement in African Leadership in 2007.