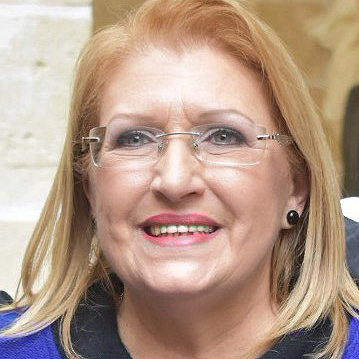 Marie-Louise Coleiro Preca is a former President of the Republic of Malta (2014- 2019). The House of Representatives, for the first time in its history, unanimously approved a parliamentary resolution nominating her as President.  At the age of 55 years, Coleiro Preca is the youngest President of the country, and the second woman occupying the office of Head of State after 32 years.

Marie-Louise Coleiro Preca is deeply passionate and vociferous about improving the lives of the most vulnerable in society, continuing to be so throughout Her Presidency, and beyond.  She is a strong advocate and avid speaker on a number of social issues including poverty and social inclusion, equality and equity, children’s participation and children’s rights, gender equality and women’s rights, peace and justice, interfaith and trans culturalism.

President Coleiro Preca presides over a number of entities, where she continues to strive to be a voice for the voiceless and a lobby for change.  Coleiro Preca is the President of Eurochild, a European network of organisations and individuals working with and for children in Europe, especially those affected by poverty and disadvantage. She is founder and President of the Malta Foundation for the Wellbeing of Society, which aims to create a safe space for dialogue on social wellbeing, bridging popular wisdom with academic research.  Ms Coleiro Preca is Chair of the Malta Trust Foundation, which supports vulnerable young people experiencing unemployment, being at risk of poverty, or social exclusion, to improve their lives through education and training, and President of the Emanuele Cancer Research Foundation, a non-profit cancer research organisation in Malta.  Coleiro Preca is a member of the Advisory Board of Women Political Leaders Global Forum.