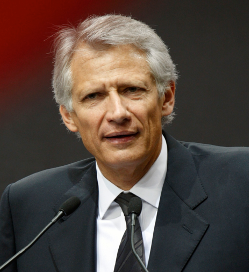 Dominique de Villepin was Prime Minister of France from 2005 to 2007. He started his career as a diplomat and served successively in Paris, Washington and New-Delhi.

Born on 14 November 1953 in Morocco,Prime Minister de Villepin  grew up abroad, in Venezuela and the U.S. among other places, before moving to France in 1968. He is a graduate of l’Institut d’Etude Politique (Sciences-Po) de Paris and l’École Nationale d’Administration, and holds a B.A. in Law and Literature.

From 1995 to 2002, he was Chief of Staff to the President of the Republic, Jacques Chirac, before becoming Minister of Foreign Affairs from 2002 to 2004 and Minister of the Interior, Internal Security and Local Rights from 2004 to 2005. As Minister of Foreign Affairs, Dominique de Villepin was a strong advocate of multilateralism. He opposed with Jacques Chirac the US plan to invade Iraq, delivering an applauded speech in the UN Security Council, to block a second resolution allowing the use of force. Throughout his tenure as Prime Minister de Villepin committed himself to boosting employment and reforming the labour market, reducing deficits and public debts, as well as stimulating growth and innovative policies through the creation of competitive clusters throughout France.

Dominique de Villepin continues to speak widely against foreign military intervention and the importance of respect of identities and cultures in our world, through lectures and conferences. He is a distinguished Professor at CEIBS (China Europe International Business School), and is author of many books on poetry, art, international relations and history.