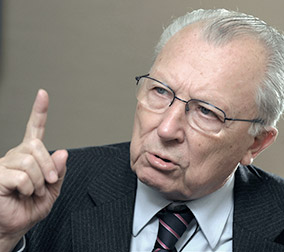 Jacques Delors holds a Degree in Economics, from the Sorbonne University of Paris (1945).

Jacques Delors worked at the Banque de France from 1945 to 1962 and was a Member of its Advisory Board from 1973 to 1979. He was the Head of Social Affairs Service at the Commissariat Général du Plan from 1962 to 1969 and the General Secretary for Permanent Training and Social Promotion from 1969 to 1973.

Jacques Delors began his political career as a Counselor for Social Affairs to the Prime Minister of France (1969-1972). In 1976, he was the Delegate for International Economic Affairs for the French Socialist Party (PSF), and from 1979 to 1981 he was a Member of Parliament and President of the Economic and Monetary Affairs Committee of the European Parliament.

Mr. Delors served as the Minister of the Economy and Finance from 1981-1984, helping to revive the French economy. From 1983 to 1985 he was Mayor of Cliché Marcha, France. In 1985, he became President of the European Commission, serving until 1995. He is known as the architect of the Single European Act which led to the introduction of a single market within the European Community in 1993. Also during his presidency, he oversaw important budgetary reforms, the first modification of the Treaty of Rome, and the transformation of the EC into the EU, which moved the EC nations toward a single currency and greater cooperation on defense.

While President of the EC, he served as the Minister of State and the Minister of National Education, Youth and Sport from 1988 to 1992. In 1992, he became the Chair of UNESCO’s International Commission on Education for the 21st Century, serving until 1999. He served as Minister Plenipotentiary at the Ministry of Foreign Affairs from 1993 until 2002, and was the President of the College of Europe, Bruges, from 1995 to 1999.

He has been the Founding Chairman of the Research and Policy Group Notre Europe in France since 1996 and President of the Council for Employment, Income and Social Cohesion from 2000 to 2009.