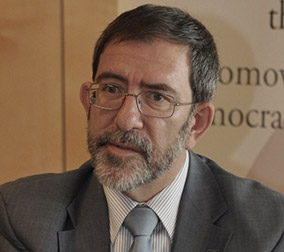 Philip Dimitrov holds a Law Degree from the University of Sofia (1973-1979). He undertook further study in the field of individual and group psychotherapy using the psycho-dynamic approach.

Philip Dimitrov worked as an attorney in Sofia between 1979 and 1990, serving as Secretary of the Bulgarian Attorneys’ Union from 1989 onwards. He currently works as a lawyer at the Bulgarian Institute for Legal Development.

Mr. Dimitrov started his political activities in the Union of Democratic Forces, a broad coalition against continued rule by the Bulgarian Communist Party. In 1990, he became Vice President of the Union, responsible for Foreign Relations. Later that year he was nominated party President, a position he held until his electoral victory in 1991. Philip Dimitrov remained in office for only a year through, after losing a vote of confidence he had called for himself.

During its term of office (until the end of 1992), his government managed to make the new democratic institutions work and started an ambitious set of democratic political and economic reforms. Under his administration, observance of human rights became an irrevocable legal and ethical norm and previous ethnic tensions and abuses were eliminated. Foreign policy focused on integration into Europe and the West.

After having left the office of prime Minister, Philip Dimitrov remained active in the Bulgarian Parliament, serving in the 36th, 37th and 40th legislature – and additionally as Deputy Speaker of the Bulgarian National Assembly since 2005. From 1995-1997 he was Vice Chairman of the Joint Parliamentary Committee EU – Bulgaria. From 1997 to 1998 he served as Ambassador of Bulgaria to the UN in New York and from 1998 to 2002 as Ambassador of Bulgaria to the US in Washington.

In September 2010, he was appointed EU Ambassador to Georgia by High Representative of the Union for Foreign Affairs and Security Policy Baroness Ashton.

In 1999 Mr. Dimitrov was awarded the Truman-Reagan Freedom Award for his contribution to overcoming Communism.

During the 2008-2009 academic year, Mr. Dimitrov held a position of Visiting Professor at the Christopher Newport University in Newport News, Virginia (USA).