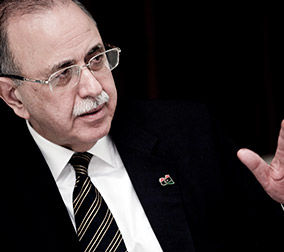 Abdurrahim El-Keib was appointed to the position by the country’s interim ruling council on the understanding that he would be replaced when the General National Congress was elected and took power. El-Keib garnered 26 out of 51 votes from the Libyan National Transitional Council (NTC). Despite repeated clashes with the NTC, his cabinet stayed in office through the national elections.

While serving as PM, El-Keib’s time has been dedicated in large part to foreign policy. Under his rule, Libya restored relationships with the USA, UK and other countries; El-Keib has also sought to collaborate with the Islamic world, and helped the Islamic community in USA during two decades, becoming key player in an informal inter-faith dialogue after the 9-11 attacks.

During his term, el-Keib and the NTC exchanged angry accusations over who was responsible for the failure to integrate revolutionaries into government forces, form a national army and disarm militias, as well as the alleged waste of billions of dollars on treating wounded Libyan fighters abroad. Keib suggested the best way to defuse the burgeoning crisis was to increase decentralization by empowering municipalities and provinces, and moving a number of government companies to marginalized regions.