A paramount figure of Libya's transition and Club de Madrid Member, Abdurrahim El-Keib recently passed away in the United States. Club de Madrid mourns his loss and sends condolences to his friends and family.

Abdurrahim El-Keib, the former Prime Minister of Libya between 2011 and 2012, died last 21 April aged 70. El Keib played a major role in Libya’s transition right after the war that led to Muammar el-Qaddafi’s fall.

Elected by the National Transitional Council to lead a transitional government in war-torn Libya, El-Keib managed to conclude a difficult mandate which led to free and transparent elections.

El-Keib’s interim government restored relations with the United States, the European Union and other countries in the West, which were in bad shape after the Libyan War. He also established collaboration with the Islamic world and the United Nations.

As Prime Minister, El-Keib welcomed a delegation from Club de Madrid. The organization was at the time focused on supporting democratic reforms in the MENA region. When his mandate at Libya’s Executive came to an end, Abdurrahim El-Keib became a Member of Club de Madrid.

The former Prime Minister participated in several of our activities. In 2015, at a UN event on the SDGs, El-Keib said: “Leaders must not deny the rights and aspirations of all members of society irrespective of their ethnic background, gender or political beliefs, a basic principle of Shared Societies”. 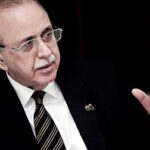