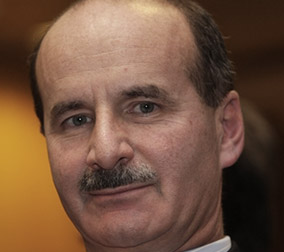 Professional Experience: José María Figueres was General Manager of Fibers of Central America from 1979 to 1984 and Vice-President of the Railway Institute of Costa Rica (Incofer) from 1987 to 1988. He worked at the San Cristóbal Agroindustrial Group, serving as President from 1984 to 1988 and as Financial Consultant from 1990 to 1992. He was a Member of the Board of Advisors of the Digital Nationals consortium linked with the Massachusetts Institute of Technology in 1998 and has served on the Board of Directors of Terremark Worldwide Inc. since 2000.

In 1994, José María Figueres was elected President of Costa Rica. While in office, he signed a Structural Adjustment Program with the IMF, privatized select state-owned companies and passed the Central Bank Law, which ended some historic monopolies of the public banking system. Mr. Figueres strengthened the relationship of Costa Rica with the United States and signed the bilateral Free Trade Agreement with Mexico in 1994, making Costa Rica the first Central American State linked with the North America Free Trade Agreement. He also took part in negotiations with the United States for the creation of the Free Trade Area of the Americas. Mr. Figueres continued Costa Rica’s participation in the Central American Common Market (MCCA) and in 1997 signed the Declaration of Managua to create a Central American Union.

Mr. Figueres has been Special Representative of the United Nations Secretary General to the Information and Communication Technologies Advisory Group, now a task force, since 2000. He has been a member of many non-profit organizations such as the World Resources Institute, World Wildlife Fund, the Leadership in Environment and Development, FUNDES International, Stockholm Environment Institute and the Costa Rica Foundation for Sustainable Development (Entebbe), of which he is the founder. Mr. Figueres was the Executive Director of the World Economic Forum (WEC) until March 2005.

Today he continues to work in the fields of technology and development, and is currently the CEO of CONCORDIA 21, based in Spain, dedicated to the support of organizations which promote development and democratic values around the world.

José María Figueres is the recipient of numerous international honors. He is the author of many books, including The Costa Rican banking system (1992), One election, two different countries (1993), The future begins now (1993), On the path to sustainable development (1995), and Testimony of a time of changes (1996).