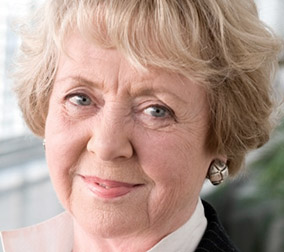 President of Iceland (1980-1996), First Woman in the World to be democratically elected a constitutional Head of State

From 1972 to 1980 served as Artistic Director of the Reykjavik Theatre Company. She has served as a member of GRIMA, the first experimental theatre group in Iceland, was a member of Alliance Francaise, and has given international lectures on Icelandic culture.

Finnbogadóttir has been a Member of the Advisory Committee on Cultural Affairs of the Nordic Council since 1976 and is currently its Chairman, a position to which she was elected in 1978. She was elected President of Iceland in 1980, making her the first woman in the world to be democratically elected a constitutional Head of State. Re-elected unopposed in 1984, she again won the presidency in 1988 with ninety-two percent of the vote. During her presidency, Vigdís Finnbogadóttir emphasized reforestation and land reclamation in badly eroded Iceland, education, and care of youth and of the language and the unique old Icelandic heritage. Finnbogadóttir retired from the presidency in 1996.

On January 26, 1990 Vigdís Finnbogadóttir was awarded the International Leadership Living Legacy Award by the Women’s International Center. She is the founding Chair of the Council of Women World Leaders (1996). She was also the first Chair (1997-2001) of the World Commission on Ethics in Scientific Knowledge and Technology (COMEST) at UNESCO in Paris where she emphasized the ethics of energy, fresh water and the information society.

In 1998 Finnbogadóttir was nominated Goodwill Ambassador of Languages at UNESCO and in 2000 UN Goodwill Ambassador in the fight against Racism and Xenophobia. Since 2001, she has been the driving force behind “Voices of the World”, a documentary film project on all the world’s living languages. The Vigdis Finnbogadottir Institute for Foreign Languages was established at the University of Iceland in 2002.

Vidís Finnbogadóttir has received several awards for her work promoting the Nordic culture, language and values, including the Land Reclamation Award in Iceland (1996), the Socrates Award in Sweden for stimulating youth to acquaint themselves with the culture and language of another Nordic country; the Icelandic Language Foundation for her active support of the Icelandic language during her time as President of Iceland, the Jakob Letterstedt’s Award for introducing and promoting Nordic cultural heritage abroad and the Clara Lachmann Prize supporting the values of Nordic democracy and identity. She has also been awarded with the United Nations Food and Agricultural Organisation Ceres medal (1997) and the Selma Lagerlöf’s Mårbacka Prize for following up on the Swedish Nobel Prize author’s ideals and concern for the environment (1998).

She has been awarded the honorary distinction of Chancellerie des Universités de Paris, France (1983) and has received Honorary Doctorates from 18 universities in North America, Europe and Asia.