International Women’s Day: the work towards a democracy that delivers

International Women's Day: the work towards a democracy that delivers
Club de Madrid

The Club de Madrid and its 109 Members are fully committed to make the International Women’s Day a year round effort as well as a celebration to inspire the world and advance for equality and dignity for all, in other words for a democracy that truly delivers.

No real democracy can be achieved overlooking the challenges women are confronting in today’s world. Too many glass ceilings, too many burdens are still dampening our way even 108 years after that New Yok march that started an unstoppable movement: equal wages are still a distant reality even in most the developed countries; climate change affects more to women than man; according to a recent study of the EU Parliament, while all refugees face great hardship the most vulnerable of those travelling to the EU in search of protection from war, are women and girls as, because of their gender, they are often the victim of violence and discrimination; female genital mutilation, “honor killings” and a poor and weak access to reproductive health and rights. Forced displacement and refugees will be one of the Club de Madrid’s main action line in 2016 and women’s situation will be a top of the agenda issue.

The list of areas where immediate measures must be taken is as long as the list of achievements. The admirable writer and feminist Simone de Beauvoir once said: “Change your life today. Don’t gamble on the future, act now, without delay”.

The Members of the Club de Madrid share that vision: we need to take real steps now, it’s urgent to face the challenges ahead and honor the memory of those 15.000 amazing women brave enough to say “enough is enough”. And even more, that vision became our mandate since the first day the Club de Madrid was born, with activities such as a full Policy Dialogue devoted to women empowerment hosted by our Member Bill Clinton; promoting women political participation in Nigeria, Sierra Leone and Uganda; capacity building for women in the Horn of Africa and the Andean Region and advocating for diversity and inclusion through our Shared Society Project.

Let’s today celebrate the International Women’s day but, at the same time, let’s keep the momentum through the year. Let’s follow de Beauvoir wisdom advice and act now pursuing same rights for all regardless sex, race or condition. In other words, let’s keep a daily fight towards a democracy that delivers for all. 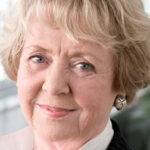 President of Iceland (1980-1996), First Woman in the World to be democratically elected a constitutional Head of State