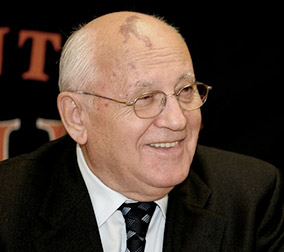 In 1978, he was appointed CCCP Secretary of Agriculture, serving until 1985, and in 1980 became a full member of the Politburo. Mr. Gorbachev served as Chairman of the Foreign Affairs Committee of the Soviet Union from 1984 to 1985.

In March of 1990, he became the President of the Soviet Union. On Dec. 25, 1991, Gorbachev resigned the presidency, effectively ending the Union of Soviet Socialist Republics. Mr. Gorbachev is credited with bringing democracy to the former Soviet Union and helping to end the Cold War.

He currently heads the Gorbachev Foundation which he founded in 1992 and also chairs the Green Cross International and the Civic Forum movement.

Mikhail Gorbachev is the recipient of the 1990 Nobel Peace Prize. His other honors include the Order of Lenin, the Red Banner of Labor, and the Badge of Honor.