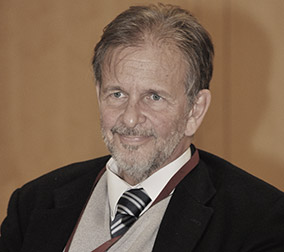 After finishing high school, at the Colegio Estudio, he studied Law at the Universidad Complutense (1959-1964).  Mr. Hidalgo also holds an MBA from Harvard University (1966-1968) and received his PhD in Political Science from the City University of New York (1996-2001).

Mr Hidalgo worked at the World Bank from 1968 to 1977, where he was promoted in 1974 to Head of Division, assuming the responsibility for the Bank’s projects in the 45 sub-Saharan countries of Africa, becoming the Banks youngest Head of Division and the first Spaniard to hold this office.

Founder of FRIDA (Foundation for Research and Investment for the Development of Africa), and President of DFC (Development Finance Corporation) since 1977. Co-founder and member of the board of directors of the PRISA – El País publishing group since 1980 and of the Cadena Ser radio station since 1984, he was Managing Director and President of Alianza Editorial, Editorial Revista de Occidente and Editorial Labor until 1989.

Other Mr. Hidalgo’s achievements are:

Founder, President and Donor of FRIDE (Fundación para las Relaciones Internacionales y el Diálogo Exterior); Co-founder of the Toledo International Centre for Peace, CITpax; Chairman of the Board of DARA International; President of Foreign Policy, Spanish Edition; Board member of the University of the Middle East, UME; Member of the board of Directors of The Education for Employment Foundation, EFE; Founding Member and Senior Fellow of the Gorbachev Foundation of North America (GFNA); and Member of the Advisory Committee of the Ethical Globalisation Initiative and the Realizing Rights.

He is member of the board of directors of the Confederación Española de Fundaciones, as well as an active member of the Club of Rome and its board of governors. With George Soros, he is founder of the European Council on Foreign Relations, with offices in several European countries, including Madrid. He is also member of the Board of Fundación Transición Española, recently created to preserve, spread and defend the values that inspired the Spanish transition to democracy.

Invested Doctor Honoris Causa by the Northeastern University in Boston in June 2001. He is the recipent of the Great Cross of Civilian Merit in Spain (2002), the Gold Medal of Extremadura and Gold Medal of the University of Extremadura;  and the Raymond Georis Price 2008, for Innovative Philanthropy in Europe, The Mercator Fund. May 31, 2008 in Istanbul.

As well as publishing numerous articles throughout his professional career, he has also written the following books: “El futuro de España” (1996), which was on the list of the top ten selling books in Spain for 23 weeks, and “Europa, Globalización y Unión Monetaria” (1998).