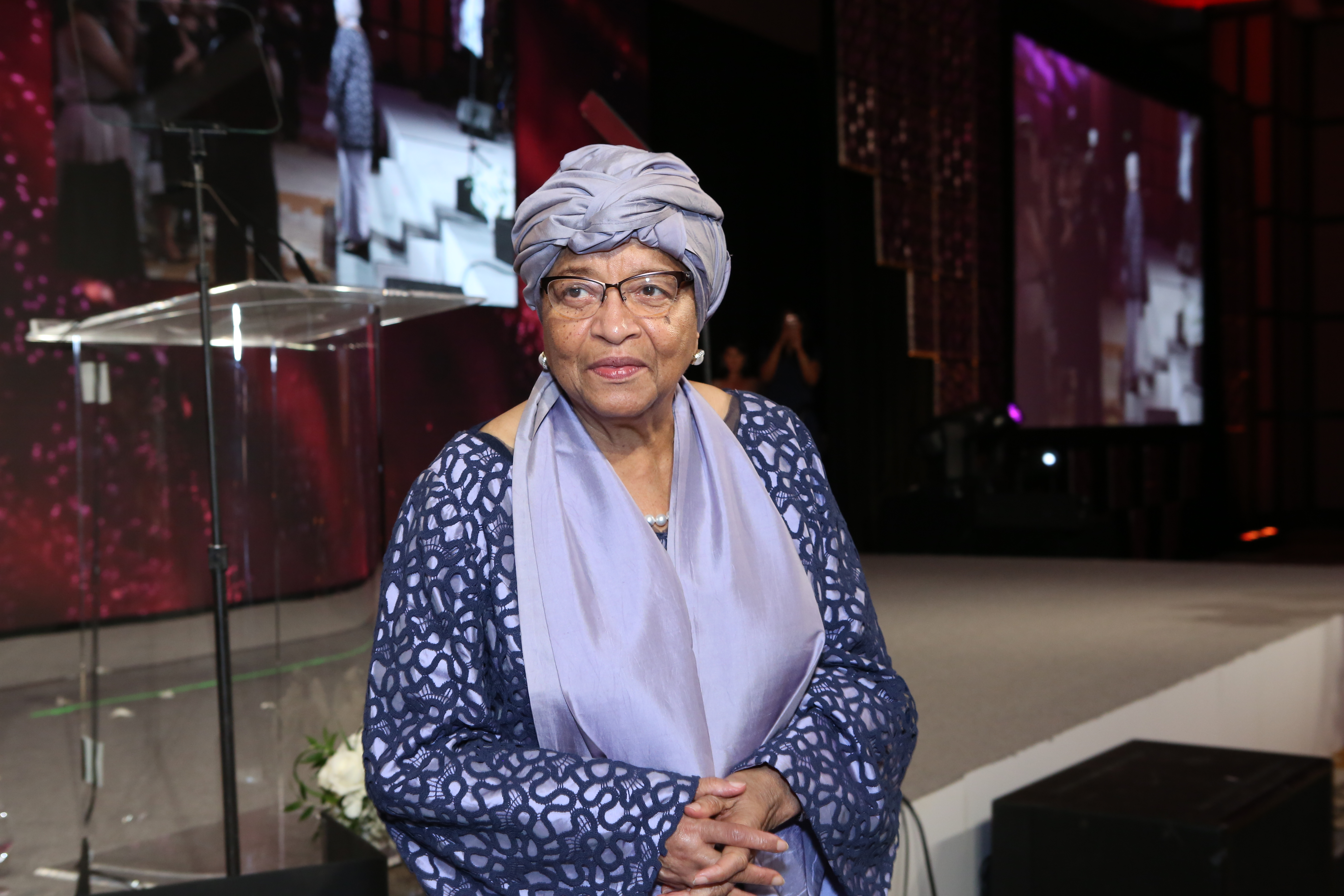 Born Ellen Eugenia Johnson, President Sirleaf is U.S. educated, she holds a master’s in public administration (MPA) from Harvard University’s Kennedy School of Government. She also earned a degree in accounting at Madison Business College in Wisconsin and received a diploma from the University of Colorado’s Economics Institute.

Known as “Africa’s Iron Lady”, Nobel Laureate for Peace Ellen Johnson Sirleaf has been a relentless  advocate for peace, democracy and women’s empowerment.

Johnson Sirleaf was elected President of the Republic of Liberia in November of 2005 and became Africa’s first democratically elected female head of state. She returned Liberia to the community of  nations after decades of regional and civil war, rebuilding its charred infrastructure, economy, and  democratic institutions. In  2014, Johnson Sirleaf presided over the response to the deadly Ebola Virus Disease effectively  mobilizing international and community-based support for the response. In 2017, after completing two  terms of office, she handed over presidential power, peacefully, and democratically, for the first time in  75 years.

Beyond national responsibilities, in May 2012 Johnson Sirleaf was appointed co-chair of the United  Nations Secretary General’s High-Level Panel of Eminent Persons on the Post-2015 Development  Agenda, tasked with crafting a roadmap for global recovery and sustainable development – The  Sustainable Development Goals. In June 2016, President Sirleaf was elected the first female  Chairperson of the Economic Community of West African States (ECOWAS) for a twelve-month term.

Among her many accolades, Johnson Sirleaf was awarded the Nobel Peace Prize in 2011, given jointly  to Ellen Johnson Sirleaf, Leymah Gbowee and Tawakkol Karman “for their non-violent struggle for the  safety of women and for women’s rights to full participation in peace-building work.” She is the recipient  of The Presidential Medal of Freedom, the Grand Croix of the Légion d’Honneur, the Ibrahim Prize for  Achievement in African Leadership, the Indira Gandhi Prize, and the Order of the Companions of OR  Tambo In Gold by the South African Government. President Sirleaf has been named one of Forbes’s  “100 Most Powerful Women in the World,” the most powerful woman in Africa (Forbes Africa, 2011).  Johnson Sirleaf has been conferred honorary doctorates by more than 15 institutions. Johnson Sirleaf has written  widely on financial, development and human rights issues. In 2008 she published her critically  acclaimed memoir, This Child Will Be Great.

At 81-years-young, Madam Sirleaf  continues her activism through the Ellen Johnson Sirleaf Presidential Center for Women and  Development and various global organizations and boards. She is also a mother, grandmother and dedicated farmer, tending the rich soil of Liberia to proudly bring produce to market.