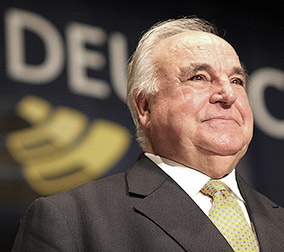 In 1969 he became the Vice Chairman of the Christian Democratic Union (CDU) and later served as Chairman from 1973 to 1998.

From 1976 to 1982, Kohl was a Member of the Bundestag and Opposition leader and in 1982 he was elected Chancellor of West Germany. While in office he cut government spending and gave strong support to NATO. With the collapse of the Berlin Wall in 1989, Kohl became a leading advocate of the integration of East and West Germany. This policy was very popular and in December 1990 his CDU-led coalition won a large majority in the Bundestag. With this victory, Kohl became the first chancellor of unified Germany since 1945. He joined other European leaders to promote the Maastricht Treaty in 1993 and the European Monetary Union. His sixteen-year term as Chancellor ended in 1998.

Kohl was the recipient of the Charlemagne Award (1988), the Spanish Principe de Asturias Prize of International Cooperation (1996) and the American Presidential Medal of Freedom (1999).