Helmut Kohl, the right man for democracy in the right time for Europe

Helmut Kohl, the right man for democracy in the right time for Europe

Khol served longer as German Chancellor than anybody else since Otto von Bismark. He ruled the country from 1982 to 1998 and left active politics in 2002. His stature as a statesman and his europeism helped to shape the map of Europe both geographically and politically. He was joined by François Miterrand and another World Leadership Alliance – Club de Madrid (WLA – CdM)Member, Felipe González, in the effort of transforming the European single market into a single currency and building the European Union. His leadership and his ability to mobilize political will were vital to make the Maastricht Treaty a reality and, subsequently, key in the birth of the European Union as we know it today.

Helmut Kohl secured his place in History by leading the successful reunification of Germany after the collapse of communism.Kohl’s passion for reunification was not welcomed by everyone, with Israel’s Prime Minister Yitzhak Shamir publicly opposing it. While mostly welcomed by the West, there were concerns, notably in Britain and Poland, that a strong unified Germany would come to dominate the continent. Inspite of this opposition, Kohl’s political ability was enough to convince Ronald Reagan in the States and Mijail Gorbachov in Russia that a unifed Germany was not going to be a threat for anyone.

In an interview he stated: “I’ve been understimated for decades” in reference to his troubled first steps in politics when he was mocked for what it was seen in those early days as a luckluster oratory and short term political vision. Today it is exactly the opposite. The reaction to his passing away reflects the deep respect and admiration for one of the most important political figures of the second half of the 20th Century in Germany, Europe and the world.

Helmut Kohl was the architect of the German reunification and a true European. We say goodbye to a great statesman. 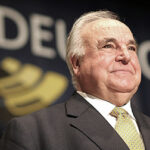