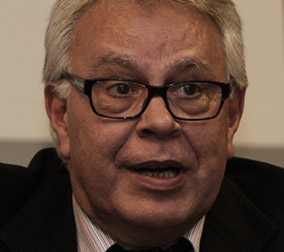 Felipe González is a former President of Spain (1982-1996). His Presidency was characterized by the modernization of the education, healthcare and social security systems, and the entry of Spain to the European Union.

Mr González studied Law in the University of Seville, from where he graduated in 1965. He had entered politics in 1962 by joining the underground group Socialist Youths of Seville. In 1964, he joined the clandestine Socialist Labor Party of Spain (PSOE), and became the Secretary General of the party in 1974 at its Congress in Suresnes, France.

In 1978, he was also elected Vice-President of the Socialist International, a position he held until 1999. In 1982, the PSOE gained a solid majority in Parliament and González was elected President of the Government. One of Gonzalez’s most important achievements was securing the entrance of Spain into the European Union in 1986.

González has been awarded numerous national and international prizes, among them the Charlemagne Prize, the Collar of the Order of Isabel the Catholic and the Great Cross of Gold from the Republic of Austria and has written three books: El Socialismo (1997), El futuro no es lo que era (2001), and Memorias del futuro (2003).

Mr González remains very active in the global arena. In 1998, he was Special Representative of the EU to Yugoslavia and chaired the World Progressive Commission of the Socialist International. Mr Gonzalez helped as mediator in the peace negotiations between Colombia and the FARC guerilla.In 2013, he founded and became the Chairman of the Fundación Felipe González, an NGO to offer answers to the political and social challenges of the 21st century; introduce citizens to the importance of the Spanish democratic transition; and favor a greater knowledge of global politics.

President Gonzalez participates in different organizations, such as the Jean Monnet Association, Real Instituto Elcano, the editorial council of Grupo Prisa, the Circle of Montevideo, the InterAction Council, and the Shimon Peres Council for Peace. In 2001, González joined the World Leadership Alliance-Club de Madrid in its constituent meeting, becoming a founding Member of the organization.