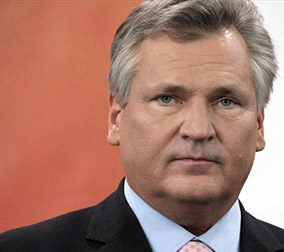 Education: Between 1973 and 1977, Aleksander Kwasniewski studied Transport Economics and Foreign Trade at the University of Gdańsk.

Aleksander Kwasniewski joined the ruling communist Polish United Workers’ Party (PZPR) in 1977, and remained member until it was dissolved in 1990. He was particularly active in the communist student movement, and worked as the editor-in-chief of the student weekly ITD magazine from 1981 until 1984, and of Sztandar Młodych from 1984 to 1985.

Mr. Kwasniewski participated in the famous “Round-Table” negotiations in Poland that finally brought the peaceful transformation of Poland and the whole Central and Eastern Europe from communism to democracy. Once the Iron Curtain had fallen, he co-founded the Social Democratic Party of the Republic of Poland (SdRP) and became its first chairman.

Aleksander Kwaśniewski won the Polish presidential elections in December 1995, defeating incumbent Lech Walesa. One of Mr. Kwasniewski’s first great achievements was to bring about a new democratic Constitution in Poland, which became effective in July 1997. Highly popular in his country, he was re-elected in 2000 for a second and final five-year term.

During his Presidency, he played a key role in the reconciliation between the Poles and the German, the Jewish and the Ukrainian people. He further inspired the international mediation efforts during the 2004 Orange Revolution in Ukraine, helping the young democracy to prevail. Finally, he also was a strong advocate of EU and NATO integration, and made Poland join both institutions during his tenure.

Mr. Kwasniewski was appointed Distinguished Scholar in the Practice of Global Leadership at Georgetown University, where, as a visiting faculty member, he teaches students in the Edmund A. Walsh School of Foreign Service.