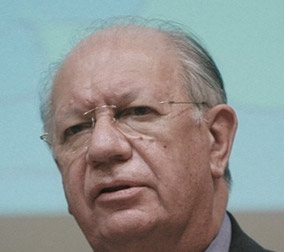 President of the Republic of Chile between 2000 and 2006, Ricardo Lagos is a lawyer and holds a PhD in Economics. His professional career began as an academic and official of various international organizations linked to the United Nations. Between 1973 – 1989 he was a staunch opponent of the military dictatorship and founded the Party for Democracy.

In 2000 he became President of the Republic of Chile from where he led processes such as the Constitutional reform; the improvement of the concessions system and with it a substantial improvement in the country’s infrastructure; the creation of a health system that would ensure timely care known as Auge and the promotion of important advances in human rights matters such as the Valech Report and compensation for more than 30,000 victims of human rights violations during the dictatorship.

After the return to democracy, he was one of the leaders of the transition process as Minister of Education and Public Works. After his presidential term, he was President of the Club of Madrid, founder of the Council for International Relations of Latin America and the Caribbean (RIAL), visiting professor at Brown University in the United States, and special envoy of the United Nations for Climate Change. He is currently part of the group The Elders and President of the Fundación Democracia y Desarrollo, of which he is its founder.